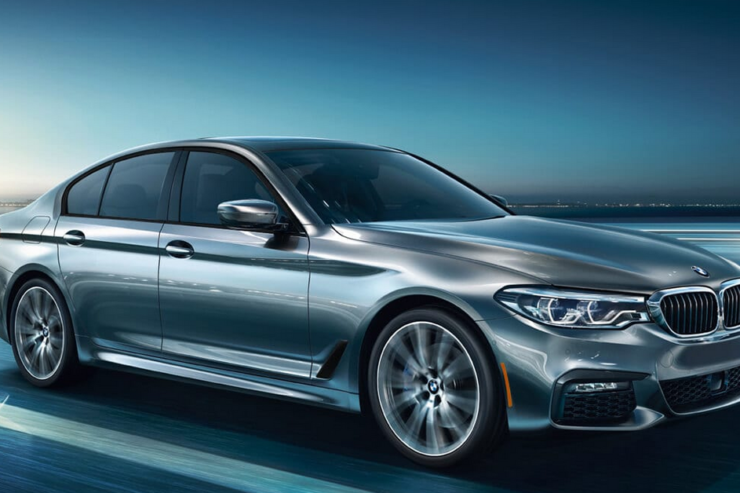 BMW has upped the game of midsize luxury sedans yet again with the 2018 5-series. They’ve taken the best components from the 7-series and 3-series to come up with a completely redesigned model. As per a usual BMW, the 5-series has everything to be expected from it: superb engines, excellent fuel economy, the latest in tech, high-quality interiors, and top-notch safety features.

Three 5-series engines have been introduced, but BMW is only releasing two in the US for now. The 530i and the 540i are expected to have an 8-speed automatic transmission with options for an all wheel drive. The 530i is a 2-liter 4-cylinder engine, while the 540i is a 3-liter inline-six. The European market is expected to get an M Performance 5-series: the M550i xDrive. It’s basically a sports car without all the power. It’s just going to be a thrilling twin turbo 4.4-liter V8 engine. That’s an impressive 0 to 60 in just four seconds. Top speed for the M550i is 155mph.

Tech and other features

The 2018 5-series will have many of the features of its predecessors. They’ve also taken a lot of the tech features from the 7 series and plugged it into the 5-series. BMW’s iDrive interface is still front and center with its touchscreen features. It also includes a self-driving technology that can literally park your car without you in it, thanks to the built-in remote control parking assistant. The 5-series also features adaptive cruise control and surround view cameras. Other safety features include lane departure warnings and traffic jam assist. This car will help you stay in your lane and even help you perform evasive maneuvers even when you’re going 100 mph. It has tire pressure monitoring system and aluminum wheels. The 5-series also offers an electric motor anti-roll system instead of hydraulics. This plug-in hybrid will go 114 miles per charge.

While it has a longer wheelbase, the 5-series track lengths remain the same in both front and rear. BMW has made this series almost 140 lbs less with its combination of materials such as aluminum and magnesium. The driver-focused cockpit is very similar to the 7-series, with its futuristic designs and clean lines. The trunk space is relatively smaller in size in comparison to regular midsize standards. The car has a standard rear defrost, options for a sun or moon roof. The 5-series has all the bells and whistles for the utmost convenience to its drivers and passengers from heated mirrors and heads-up display to keyless entry and start. Luxury features such as heated rear seats and cooled driver seats are also available.

This 5 passenger capacity vehicle is also roomy as expected from a midsized luxury sedan. It’s got options for satellite radio and an entertainment system.

Everything to be expected from BMW is featured in the latest 5-series. With a strong competition in the Mercedes, Jaguar, and Volvo brands, BMW has stepped up its game. Driving it will be the only test to its subtle power and ingenuity.